It still surprises me that, for the push towards greener sources of transportation and energy, that the United States is still a little behind as far as being bicycle-friendly. On one end of the spectrum, you have Paris enacting a vehicle ban in certain parts of the city on Sundays, forcing more cars off of the road and fighting pollution. And here in the States, the rest of the world is amazed how many cars only have one driver in them, and taking a bike is still quite dangerous.

We do have several cities in the United States looking to change that outlook. Whether these cities have adopted measures that make taking the bike easier than the bus, or they just have great scenic views, here are five cities that are great for two wheels.

I know. Writing a list of bikeable cities and including Portland at the top is cliché. You knew about Portland being bike friendly back before it was cool; however, it still deserves top billing. While Portland is known just as well for its cold, rainy weather, biking is still fairly easy and many residents use their bikes as their main mode of transportation. 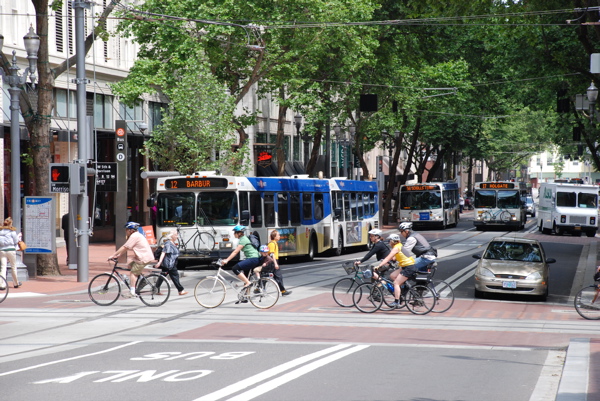 Whether they’re taking it to work or just headed to go see a band you’ve probably never heard of, Portland is America’s leader in being bike friendly. Not only have they provided ample infrastructure for cyclists, there are several areas to rent bicycles, businesses, from coffee shops to the airport, with bicycle parking spots, and a large community of bike enthusiasts.

And if you need a far weirder reason, Portland has its annual participation with the World Naked Bike Ride. It takes having the confidence to safely ride a bicycle clothed before going out as an exhibitionist.

I am just as surprised as you are that Tucson is actually a great place for bicyclists. After having spent about a decade in the Phoenix area, the combination of the heat and the drivers would not have made me feel safe leaving the house on something that didn’t have four wheels and air conditioning. But unlike the Phoenix Valley, Tucson has implemented many ways to encourage bike riding about the city.

Following Portland’s lead, there are many designated bike paths, bicycle parking, and now bikeways being constructed (like this very cool Rattlesnake Bridge). The city has even released both a metro and a neighborhood bike map, making transportation on your cycle easier than ever. If you’re looking for something more adventurous than the 9-to-5 route, Tucson has been drawing in mountain bikers for years, especially when it’s cool enough in the winter to not melt to the seat. The scenic views, biking groups and clubs, and push for more bikes from the city make Tucson an ideal destination for bicycling.

Minneapolis has been Portland’s rival for the title of Most Bikeable City for years. Which, I suppose there are worse things to fight over than who makes active, healthy living and fighting pollution easiest for citizens. Minneapolis has hundreds of miles of bike-only roads that encompass the city. And this isn’t just a big bike lane with traffic barreling alongside riders; this is paved roadways through scenic Minnesota wilderness, free from exhaust and rush hour traffic.

Most of the terrain is flat, and like Portland, the locals can bike year-round – but visitors might want to stick to the warmer months. Minneapolis has also implemented a bike share program, Nice Ride Minnesota, which makes finding a pair of handlebars even easier. The city has transformed bike riding from purely recreational, to including it as the go-to means of transportation. Hopefully other cities will follow in their footsteps.

With its mild weather, beautiful Bay views, and huge biking community, Frisco is a great place to bring your bicycle. While biking isn’t quite as easy as it is in Portland or Minnesota, San Francisco has taken some solid measures to make it easier to travel by bike. They may not have a system of bike-only highways, but they have specific, marked bicycle lanes which are even wide enough to actually use safely, unlike so many other cities.

Employers can opt-in to the San Francisco Bicycle Commuter Benefit, which is a tax-free subsidy earning qualified commuters $20 a month just for going to and from work on a bicycle. Many commuter trains allow bikes to be brought onboard, and most, if not all, buses have bike racks. A bike share program has been started, and there’s even an open source online bike map to make sure you don’t accidentally wind up going up (or down) Telegraph Hill.

Although Miami may be a little late to the scene, bicycling around the city is really beginning to take off. And if you’ve ever spent time driving through Miami, you’ve probably been tempted to ditch your car as well. Bike rentals and tours are already available to individuals and groups and take riders through Miami’s famous art deco district and down to their gorgeous beach.

Unlike the other biking cities covered, Miami has the weather for biking every day of the year, without the threat of the bitter cold or desert heat. And usually when it rains, it’s only on one side of the street anyways. Many state parks have designated bike trails, making navigating the wetlands and lighthouses even more fun. Some state parks even allow free admission when you don’t bring a car, making for a great day adventure or date outside.

Bonus tip: if you find that you especially love biking through Everglades National Park, they are looking for safety bike patrol volunteers to help keep visitors safe! Although, to be fair, a bicycle may not be fast enough to outrun an alligator.